What You Need to Know About Upgrading to Drupal 9

In my previous blog post, Preparing for Drupal 9, I opened up the discussion about this core update and some of the main differences between Drupal 8 and 9. The main takeaway you should know is that Drupal 9 will be built within Drupal 8, allowing for an easy upgrade. But which upgrade path should you take if you’re on Drupal 7? Let’s continue the conversation by mapping out a game plan for your CMS update.

Do you really need to update Drupal?

The recommended life span of a website is 3-5 years. If you’ve had your Drupal 7 site for three or more years, you can feel confident in the return on that investment, and that your website will remain solid until end-of-life. As time goes on, technology continues to change. Staying on top of your CMS upgrades is essential to your website’s functionality and security. An outdated content management system can (and will) leave your website open to security risks or cause critical issues with mandatory server changes.

What does end-of-life (EOL) mean for Drupal?

Simply put, end-of-life means that it will no longer be supported, maintained, or improved by the Drupal community. Having your website on a version of Drupal that has reached EOL will mean a few things:

Drupal 7 and 8 websites will no longer be able to utilize the community support system to build, maintain, enhance, and provide security to the software’s core or to any modules. Using unsupported software is risky and never recommended.

When Drupal went from version 7 to Drupal 8, it was a major overhaul. The Drupal Community built a radically different version of Drupal in a separate codebase. Unfortunately this meant that many modules and functionality that existed in 7, were different or did not exist at all in Drupal 8. Because of this, Drupal 7 websites should look at the update from Drupal 7 to Drupal 8 as more of a rebuild or re-platform, rather than an update or simple migration.

The good news is that the Drupal Community has learned their lesson and are taking a much different approach from Drupal 8 to Drupal 9.  Instead of working on Drupal 9 in a separate codebase, they are building Drupal 9 in Drupal 8. This means that they are adding new functionality as backwards-compatible code instead of rethinking the entire codebase. Ultimately, once sites are on Drupal 8, the upgrade to Drupal 9 will be straightforward and relatively easy (were talking hours of time vs rebuild projects) as long as you are keeping your version of Drupal 8 and any modules as up to date as possible along the way. 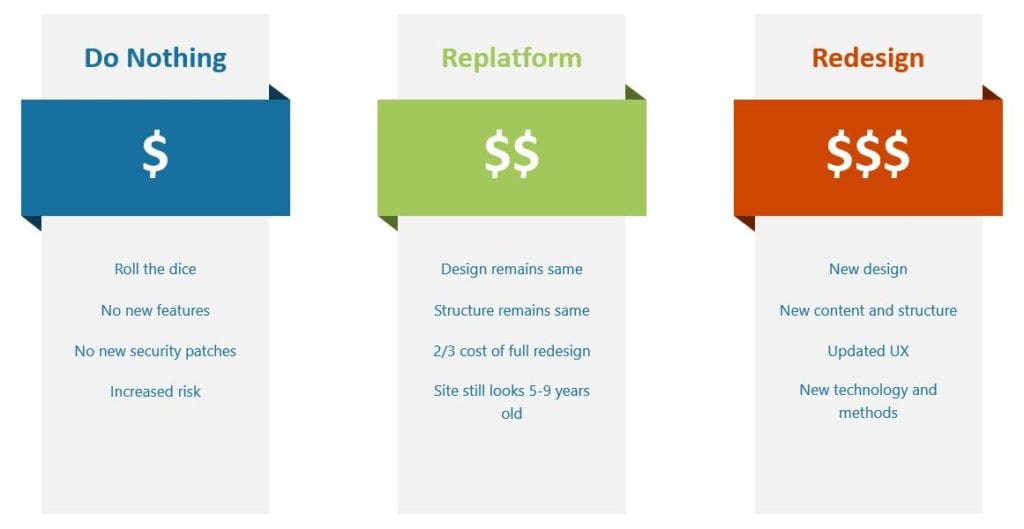 Upgrading an existing site from Drupal 7 to 9 is a complicated process, since most of the work takes place during to 7 to 8 rebuild. With Drupal 7’s end-of-life approaching, you will need to consider your timeline, and will have to upgrade to drupal 9 and go live within a span of 18 months, to stay secure with your site. It can be helpful to look at your Drupal upgrade as if you were trying to get from point A to point B. The most efficient way to reach your destination is in a straight line (Drupal 7, 8, then 9) rather than taking a detour and going around Drupal 8 to avoid it.

Once your site is on Drupal 8, the upgrade to 9 is relatively easy. You can start rebuilding your site in Drupal 8, and then just upgrade to 9 when it comes out. This route is smoother transition than jumping from 7 to 9. In the long run, migrating step by step is the easiest plan.

Ready to get started with your Drupal update? Let’s talk. Our website development team is actively preparing for Drupal 9, and would be happy to go over any questions you may have about the process.

Which (Digital) Marketing Strategy is MOST Effective?

How to Evaluate a Web Company’s Abilities